Shadows stretch across the stone to grasp the crisscrossed spears and rounded shield.

A nearby fire, fighting back the dark, and glistening on the spear tips’ hardened steel

casts its glow upon a wizened man. He sits beside his grandson, gazing at the flame.

The boy is playing with a map. “The Empire of Assyria,” the child reads aloud,

fingers marking where his lands will go. And then a pause, “Why is there a hole?”

And there, a circle, unmarked parchment, surrounded by a sea of inky black.

were shattered. Our chariots were stopped. Our army swallowed up within a hole.

Removing the boundaries of people; plundering treasure, wherever nature allowed–

the axe that hewed its way through forests, gathering fuel for our orange flame. 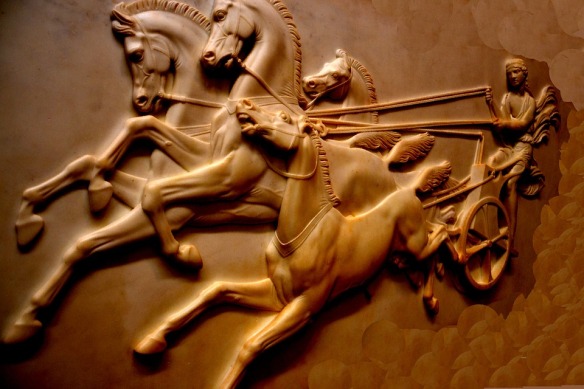 Sennacherib! The scourge of nations, master of the horse, wherever flared the flame

of his ambition, men would quake; women hide their children from the fearsome black

of night. As gathering eggs from a nest, Sennacherib gathered the earth, boasting aloud

of all the gods of all the cities we had burned. No deity could hold effectual shield

against his might. And so he turned to put the Yahweh god beneath his rule and steel.

Jerusalem, home of wonders, seat of Judah,  he would devour whole.

I was with our captains at the gate, where, awe-struck Jews stared hopeless at the hole

from which they never would return again. Our captain told them of the orange flame.

“Where are the gods of Sepharvaim, Arpad and Hamath? What deities did we not steal

and throw into the fire of our wrath, burning them till smoking, charred, and black

their stubbled trunks were hurled into a heap? Forever failures. Impotent to shield.

Your Yahweh god will end the same—helpless as his people cry aloud.”

I passed the night in fitful sleep, but never heard a soldier cry aloud.

We rose that morning, the officers and I, to burn the Yahweh god in some great hole,

and all around…was death.  Soldiers: silent, pale, and grey. Abandoned spear and shield

lay scattered in our tents. Through the mist, the glowing embers of our orange flame—

abandoned fires, licking on the stumps of downed Assyrian wood—charred and black.

The soles of men that dried up all the streams of Egypt, dead, beside their steel.”

The old man’s speaking dies away, the fire glinting off his eyes like steel.

“No one will tell that story now,” the old man says again. “No one would be allowed.

That map you have is all that tells the truth. And even all our scholars will not black

the name of great Ashur: the only god that night who could not keep his people whole.

Yahweh put his hook in us, and turned us back from where we came. Our flame

put out. Jerusalem remains the home of wonders for they have him as their shield.”

The child looks long at the map, staring at the hole.

And then, the fire, and in the orange heat a flame—

blue and beautiful— but deadly, flickers on the nearby shield.